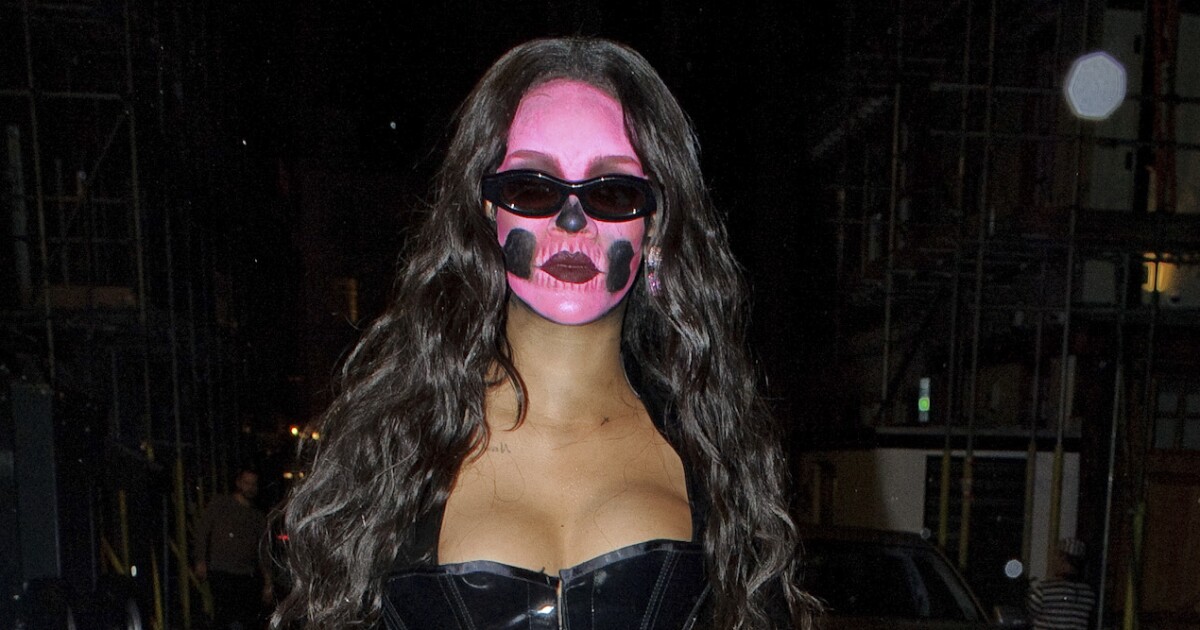 Welcome to the most unnerving Halloween week in memory.

All the costumes, treats and fun of the spooky season are off the table due to COVID-19. But the real terrors of a raging virus and a tense election (to say the least) are very present. Michael Myers himself would probably look around and go back to Laurie Strode’s closet to hide this one.

If you’re stuck doing witch-like incantations at home (or just hammering hot apple cider until the morning of November 4), The Times’ music team has put together a playlist to keep demons at bay, nÃ¼-metal nightmares with horrific hip horrorcore. -hop at Belarusian goth TikTok hits. Just wear a mask if you go out, ghouls.

Zambian Canadian artist and 2020 Polaris Prize winner Ashanti Mutinta, better known as Backxwash, invites us to wade through the back of her brain in the murky wizard of ‘Spells’, featuring sinister howls and worms MC Devi McCallion’s spitfire. “I told my mom the devil has a place for me,” McCallion rhymes, “I’m going to hell and I bet you I’ll be safe for weeks.” (Suzy Exposito)

Cut, “Blood of the Fang”

Coated in horror movie parlance, new left-field hip-hop track “Blood of the Fang” is about America’s scariest story – that of slavery, secular oppression and the country’s “blood addiction”. Checking the names of black activists and describing the gnarled consequences of racism, Clipping’s Daveed Diggs promises to ‘digest the flesh of every villainous human /’ until the best, darkest blood returns to power “. (Randall Roberts)

The Cramps, “I was a teenage werewolf”

All good Halloween music should be a bit campy, and no one has done it better than the Scary Skeleton Cartoon Music Cramps. â€œI Was a Teenage Werewolfâ€ borrowed its title from a schlocky monster movie, but truth be told, we all feel like hairy hormonal freaks locked inside these days. (August Brown)

The early ’90s pop-grunge classic of the Cranberries is revived with chilling precision by the former child star whose career continues to refuse to die. (Mikael Bois)

Inspired in part by various women he had met at Troubadour and Whiskey a Go Go, Don Henley’s debut writing credit with the Eagles deploys a slinky-spooky soft-rock groove to invoke the image of a woman. to “raven hair and ruby â€‹â€‹lips” that can “rock you at night until your skin turns red”. (MW)

RZA’s horror supergroup starring Prince Paul, Frukwan, and Poetic had one of the best ’90s rap album covers for “6 feet deep,” and that dark descent into glue-snorting madness is l one of his masterpieces. Boiling rats, crack heads, devouring flames: horror movie or real life for the poor in New York City of the Giuliani era? (A B)

“I’m not going to smile, but I’m going to show you my teeth,” Halsey spits out in her single 2019 track, “Nightmare.” A steamy missing chameleon Top 40 alt-rock bombshell, Halsey unleashes scorching beards on a special kind of horror show: Patriarchy. “I have been polite, but I will not be taken to death / Let a man tell me what to do in my bed.” (SE)

Crooner Brett Sparks presents the opening verse of this sad 2000 country song as if he were a minister delivering a eulogy: “Poor, poor Lenore carried away by crows / How she wandered alone where red oaks grow.” With lyrics written by his wife Rennie Sparks, “Poor, Poor Lenore” travels with the birds and our hero, “their beaks twisted in his hair”, as they fly Lenore “on top of a dead tree where the birds go. broken hearts “. Who has trampled his heart? A gravedigger, of course, who “kissed her bloody mouth so hard / Then he let her cry where the red oaks die.” (DR)

Haunted by the memory of her ex, this flame “X Factor” loudly goes to the river to pray, only to come home and find the evil eyes of the guy still “sitting on the wall … watch[ing] every move I make. (MW)

The SoCal-raised singer, songwriter and noise artist has an improbable knack for a superb cover. His evisceration of Chris Isaak’s hazy pop hit has a lot of love for the original. But now it’s a barely recognizable Gothic opera nightmare that samples â€œThrenody for the Victims of Hiroshimaâ€ by Polish composer Krzysztof Penderecki. Beautiful, horrible – and both funny and annoying once the chorus is launched. (A B)

The dark, mighty perfection of the king of hip-hop streaming and the dark prince of metal – oh, and Travis Scott, who bemoans the fact that he can’t fit all of his women into his little sports car. (MW)

Ministry, “(Every day is) Halloween”

Ministry, “Every day is Halloween”

Long before Al Jourgensen became the dreadlocked soldier of the Tories’ nightmares, he was a cute new wave boy who made an escape from his contract with Arista Records in pursuit of darker pastures. In his single “(Every Day) Is Halloween from 1984”, Jourgensen rallies those who stay scary all year round: “I let their little minds think / That they’re dealing with someone who’s about to / And I dress that way just to keep them at bay / Because Halloween is everyday. (SE)

Misfits, “Mom, can I go out and kill tonight?”

If you have to ask, you know the answer. Of course you can’t, Glenn, but it’s never stopped you before. A 1982 song about bullying and building both the brain and the body for revenge, the classic Jersey Misfits punk song features that scary bit of poetry: wandering around until I find my dungeon / I’ll bring back a souvenir / Because it’s my mom’s dream. (DR)

Belarusian post-punks Molchat Doma were virtually unknown beyond Europe until their doom-laden 2017 track “Sudno (Boris Ryzhy)” was given a second life on TikTok. Marked by eerie synths and late Soviet-era unease, the song recorded viral videos capturing both Russian club kids and American hypebeasts – as well as a colony of hanging bats. The band’s next album, “Monument”, will be released on November 13. (SE)

The vocal hook without words is as innocuous as “Blue (Da Ba Dee) of Eiffel 65”. But listen intently to the pre-chorus of this hard-hitting electro-pop song, in which Rihanna describes an experience with fear – herself “a thief in the night to come and catch you” – in downright creepy language. (MW)

Salem, “The Fall of the Stars”

Salem never got enough credit for the way his depressive, drugged trap – which was thirsty for death and sub-bass – became a role model for SoundCloud rap a decade later. Ten years after their LP “King Night”, the duo are back with “Fires in Heaven” and plunge into a tornado in the music video for the single “Starfall”. (A B)

Go ahead, turn off all the lights in your apartment. Put on this soundtrack of slippery synth noises and unbearably tensioned drones from Alex Garland’s 2018 sci-fi horror film about aliens, the warp and unknowable cruelty of nature (here’s an excerpt from ” The Alien “, its scariest part). Wait for this four note theme to strike. Then open the closet door and imagine what awaits you on the other side. (A B)

â€œHey! You’re eating my heart!â€ Barks David Yow of Texas post-punk band Scratch Acid to open this song about being eaten alive. Yow, who went on to form the Jesus Lizard, has a meow to die for and use it at full blast as the high-pitched guitar sounds stab through time. â€œStop eating my brain!â€ (DR)

Siouxsie and the Banshees, “Bewitched”

Siouxsie and the Banshees – Spellbound

Siouxsie Sioux, the English godmother of Goth, let her inner witch run wild on the 1981 Banshees LP “Juju”. In the opening track “Spellbound”, the lurking bassline gives way to a dizzying chase between guitar and drums, and to a greater extent, the witch and she bewitched. â€œYou hear laughter / Cracking through the walls,â€ Siouxsie hisses, â€œIt turns you around / You have no choice. “(SE)

A typically sharp threat of violence from Iowa’s masked metalheads – “I’ll reach out and take a bite of this – you call a heart” – which unexpectedly gets a pained post-emo melody jerk . Figures that the plague is “you”. (MW)

Released during a devastating economic downturn that closed shops and clubs and saw the rise of white nationalism, the British ska group’s 1981 single is fueled by a sense of dread. Organ chords straight out of a monster movie from the Lon Cheney era slide along. A jerky beat suggests a zombie limping down a desolate highway. “I can’t go on anymore,” cries Terry Hall, like he’s falling to dust. (DR)

There are career-ending diss tracks, and then there’s Three 6’s â€œLive by Yo Repâ€, a â€œMalleus Maleficarumâ€ for Memphis rap. Here is a sample of the fates that await their enemies in Bone Thugs N ‘Harmony: “I want to slowly peel all of your skin / Get some fat and boil it hot, pour it on you and your dead friends”, “Les body sit in a box chopped into pieces / His soul rose, I placed them under my mattress, “” I broke the blender and made Krayzie sauce. â€œLater, Three 6 Mafia would win a well-deserved Oscar for the original song. (A B)

One of 16 spooky tracks from an album dub by San Francisco producer Ben Stokes under his early 2000s Tino nickname, this deep, breakbeat-focused instrumental instrument contains plenty of miserable old samples. It’s from “Tino’s Breaks Vol. 6: Hallowe’en Dub â€, a dense collection of howls, moans and growls which, combined with mid-tempo beats, make it a staple of the seasonal dance floor. (DR)