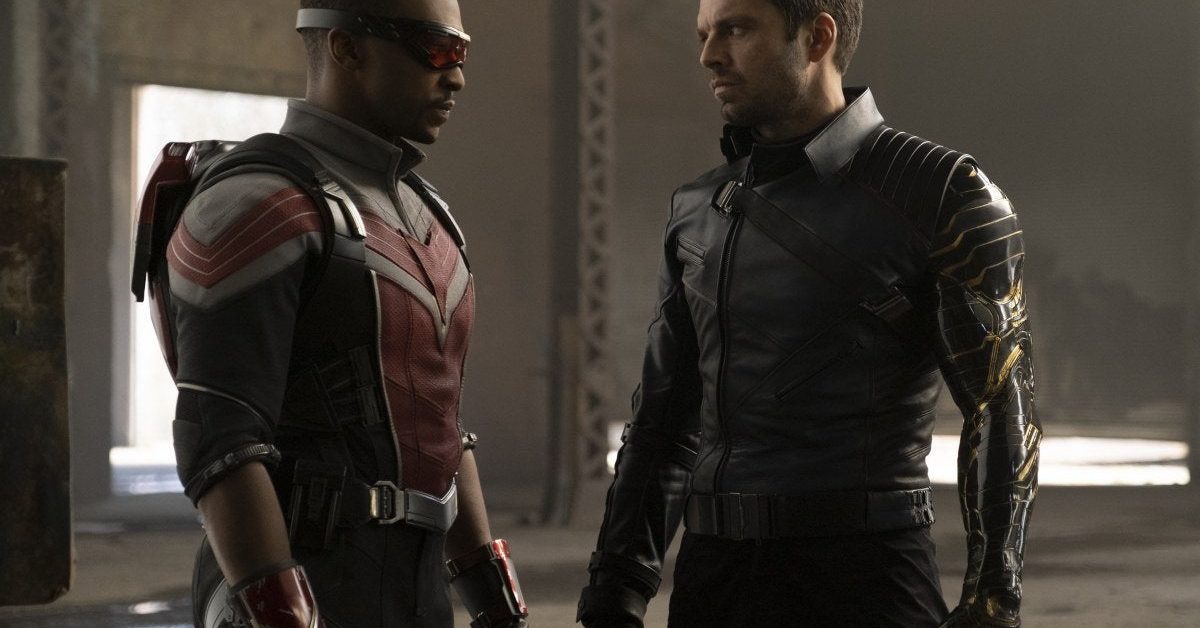 The Falcon and the Winter Soldier debuted on Friday, and the first episode was solid if you ask me. Do you know what would make it better though? An original soundtrack of rock songs. What doesn’t rock music improve? Either way, over the next six weeks, we’ll try (and hope not to fail) to match some songs with some key scenes from the series and try to explain why we chose them. The MCU has had some great musical cues in its 10+ years, and we thought it was fair to try and give The Falcon and the Winter Soldier a soundtrack of their own.

The Falcon and the Winter Soldier Scene 1: The Bucky Opera

The first scene that I really enjoyed in this first episode was when we were introduced to Bucky in the therapist’s office. Some great work from Sebastian Stan and Amy Aquino there. We know Bucky went through the wringer as viewers, but they do a good job pointing out that while so, he’s been brainwashed and now has a clean slate, he’s hard to come to terms with. After doing so many terrible things to so many people, it would be difficult to move forward without feeling indebted to the world. What better couple for Bucky’s lyrical saga than Dream Theater? Their song “Pull Me Under” will be our first couple. Pull me below / Pull me below / Pull me below I’m not afraid / All I feel is honor and grudge / All I can do is fix things. Perfect background music for Bucky.

The Falcon and the Winter Soldier Scene 2: The Banker Needs a Punch

Falcon and the Winter Soldier is going to bring us a wonderful story about Sam Wilson’s family, including his relationship with his sister Sarah, played by Adepero Oduye. They have a really good dynamic together, and it was great to see that while her brother does all of these amazing things, he’s still just Sam for her, the stubbornness and everything. And the boy was both testing their patience with this banker. I wanted Sam to hit him in his smug face, asking for selfies and the like, knowing he was about to deny them that loan. Yet they are family, and Diana ross“When We Grow Up” was playing in my head as they came out of there. And when we’re grown up, do you think we’ll see / That I’m still like you and you’re still like me? / Maybe I’ll be pretty; you might grow up / But we don’t need to change at all.

The Falcon and the Winter Soldier Scene 3: Fight!

Falcon’s opening action streak in Pursuit of Batroc was one of the best action streaks in MCU history. Fast whip and full of spectacular visuals, it was an exciting and thrilling way to kick off the series, and I had Metallica“Eye of the Beholder” crossed my head sitting there for some reason. There are more energetic songs, especially from Metallica, but the reason it made the cut for me was the booming bass and booming guitars for me. Plus, this song’s solo kicks ass.

Did you like it? Thanks for sharing on social media!

2021-03-21
Previous Post: Meet the music group that sings about fruits and vegetables but is allergic to almost everything
Next Post: The 4th Uncut New Music Playlist of 2021