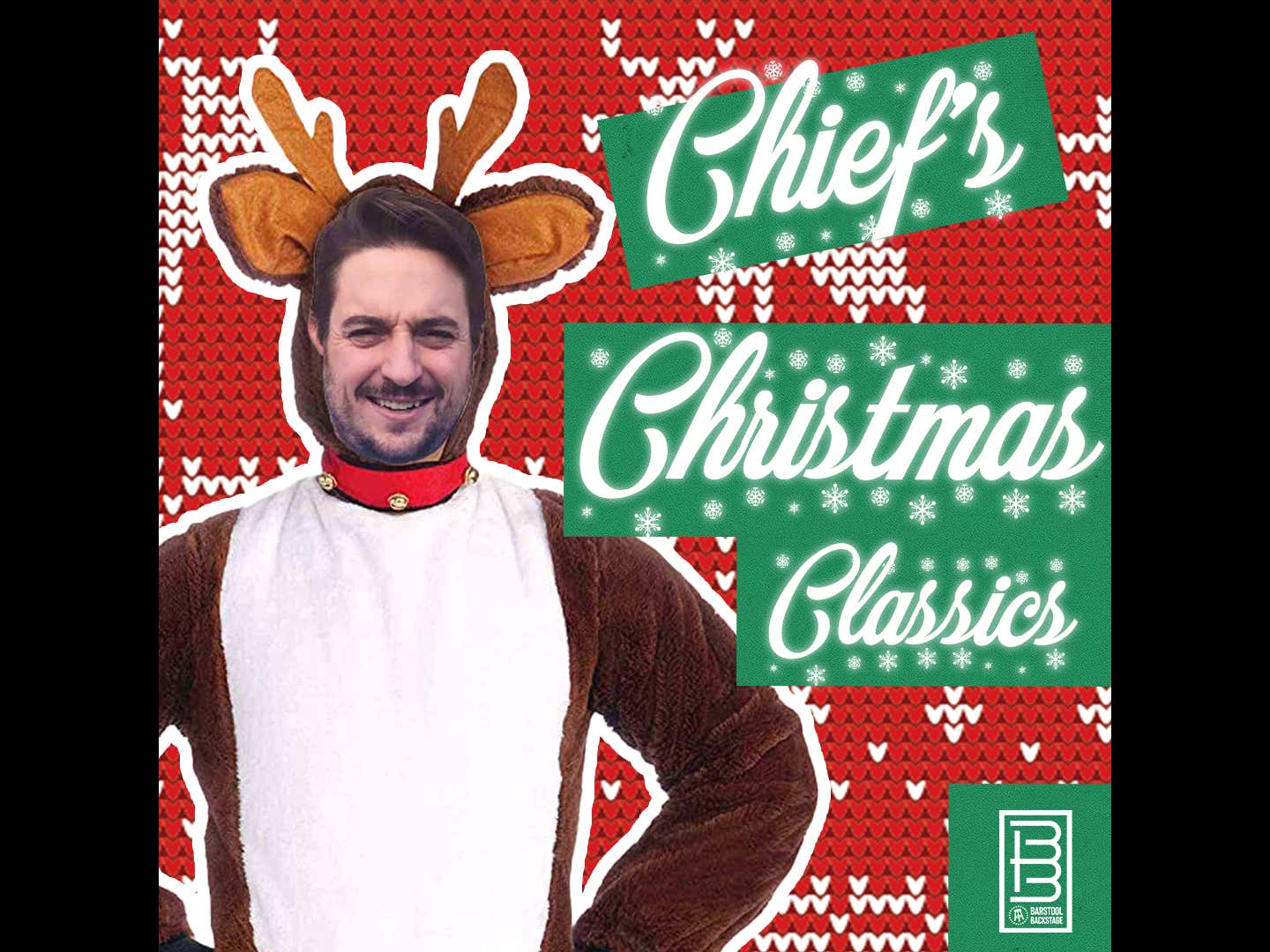 Chief has put together the best Christmas music playlist for you savages so enjoy! BONUS – New music Tuesday

And Coley’s rap bands that no one has ever heard of or remembers.

These are just a few that we have in the pipeline. If you have any suggestions or ideas for what you’d like to see, send them to me on social media or in the comments below.

And if you need a backup, or just want an ongoing party mix, here’s my famous â€œElf On The Shelfâ€ Christmas Mix from a few years ago.

Here’s everything that happened this week in music-

– Alicia Keys released her eighth studio album Keys. She offered a reminder of her power and creativity as a recording artist: the project is split into two halves, “Originals” (which features more classic soul-pop) and “Unlocked” (which reworks from these same songs playfully, with producer Mike WiLL Made-It often by his side).

– Billie Eilish returned to Saturday Night Live on December 11, as a host and musical guest. Between a few hilarious skits, the 19-year-old superstar singer delivered memorable performances of songs from her latest album, Happier than ever.

– Pink is the best. She hopped on a Zoom call with 63-year-old fan Diane Berberian, who is currently in hospice care with terminal bone cancer, to make her bucket list wish come true. â€œTHANKS TO ALL WHO TAKEN THE TIME TO TRY AND MAKE CONNECTIONSâ€¦ OUR DREAM HAS COME FULFILLED !!!! The competitor of the US National Paratriathlon Championships captioned the post.

– The 20th anniversary of Avril Lavigne’s 2002 single “Sk8er Boi” is fast approaching, and the singer feels nostalgic for those simpler days. So nostalgic, in fact, that the 37-year-old singer is planning a big-screen celebration of the second single from her debut album, Let Go.

Lavigne told the iHeartRadio â€œShe is the Voiceâ€ podcast over the weekend about the song which she has proven to be still one of her favorites to play live. “And so, I’m actually going to turn this song into a movieâ€¦ and take it to the next level.”

– “Good Ones” just got a scent spritz. Today, Charli XCX unveiled a new remix of her latest hit single courtesy of Perfume Genius.

– Michael Nesmith, the wool-hat singer-songwriter and guitarist who, along with Davy Jones, Peter Tork and Micky Dolenz, became a 1960s television star and pop sensation as a member of the Monkees, is deceased. He was 78 years old.

– Korn hits the road next year. The rock band announced on Tuesday, December 13 a series of tour dates in the United States to support their upcoming album Requiem, released on February 4. The date series will begin March 4 in Springfield, Missouri, and stop in Albany, Minneapolis, and Hershey, Pa. Before concluding on April 1 in Wichita, Kan.

– Guns N ‘Roses, Foo Fighters, KISS and Korn will headline the “Welcome To Rockville” festival in Daytona Beach, Fla., Which returns to Daytona International Speedway from May 19-22.

– Big Thief shared two new songs, “No Reason” and “Spud Infinity”. Both tracks appear on their upcoming album, Dragon New Warm Mountain I Believe in You, which will be released on February 11 via 4AD.

– Dashboard Confessional’s latest single “Here’s to Moving On” is an exercise in deep personal honesty. Yet although the track – and indeed, much of the album it came from, the upcoming All the Truth That I Can Tell – was written months before Chris Carrabba’s near-fatal motorcycle crash in 2020, its meaning changed as a result of this frightening trauma. .

– Animal Collective released their latest single “Walker” today, along with the backing video for the track.

– Bon Iver and composer Nicholas Britell have teamed up for a new song, “Second Nature”.

– Ahead of the release of their new album next month, Elvis Costello & The Imposters shared another single. The latest track from the British power-pop icon is called “Paint the Red Rose Blue”.

– After Legends never die, the posthumous album Juice WRLD from last year, continued the legacy of the late rapper with revealing lyricism and hit streams, a follow-up LP Fight demons offers 55 additional minutes of raw emotion and guest stars paying homage to a singular artist who left too early. As with Legends Never Die, some of the posthumous teams, like “Feline” with Polo G and Trippie Redd, crack up, and some solo cuts like the pre-release single “Already Dead” are hard to absorb; Juice’s voice remains vibrant throughout the project, another reminder of the enormity of his loss.

– I can’t seem to figure out this NFT stuff for the life of me. But I know it’s a big deal right now. And the big news this week was Bored Ape # 9797 from influential Bored Ape Yacht Club project NFT released a music video on Friday (December 10), becoming the first NFT to do so, and Billboard gets the first glimpse of the visual.

The video is for a song called “Delist Your Ape (2DaMoon)”, which stars hip-hop artist Reo Cragun, who wrote the song, and Clear Eyes (aka Jeremy Lloyd of electronic duo Marian Hill). In the animated visual created by Syft and Beverly Films, a group of monkeys are aboard a yacht similar to the one teased by BAYC for its first annual ApeFest which took place from October 31 to November 31. 6 in New York. As the camera zooms in, # 9797 – sometimes referred to as “Jimbo” – begins to sing.

– Rick Ross released his new album, Richer than I have ever been. He doesn’t reinvent the wheel Ross has carved out of the rap world, but rather lets it stay in his pocket and deliver more hits, from the opulent “Outlawz” with Jazmine Sullivan and 21 Savage to the breathtaking title.

– FKA Twigs and The Weeknd are preparing to drop their â€œTears in the Clubâ€ meditative collaboration on Thursday (December 16). The song, due out at 7 p.m. ET, follows FKA’s November team with Central Cee, “Measure of a Man.”

– The official soundtrack for the movie Summer of Soul (â€¦ Or, When The Revolution Could Not Be Televised) will be released on January 28th.

The official soundtrack arrives exactly one year after the captivating documentary was released on January 28, 2021.

– RZA and Flatbush Zombies released their new single “Plug Addicts”, as well as the backing video for the track.

– Zedd’s real artillery arsenal just got deeper, thanks to a remix of the 2021 champions theme from VALORANT, “Die For You”.

– After a hiatus of nearly a decade, Junkie XL is back with a set of deep, punchy techno tracks that bring cinematic sense to the warehouse rave.

A lint scam, as the EP is titled, releases Friday (December 10) on Sasha’s LNOE label. This is a dark and thrilling four-track collection that was inspired by Holkenborg’s work on the 2020 Netflix mystery series White Lines. The show takes place on the festive island of Ibiza. Naturally, scoring the seedy clubs’ bellies got Junkie XL’s juice flowing.

– “Metamora” is a joint release that Apollo Xo does in tandem with Tanner Dixon. This is Apollo Xo’s eighth single of 2021 and obviously, in the context of its repertoire, one collaboration spawns another, with “Metamora” succeeding her team with Rich Furniss at the end of October, “I’ll Be There” .

– In his solo work, Tom Morello continues Rage Against the Machine. Lately, however, he can be found mixing his groaning electrical expertise with Dr. Fresch’s keen electronics sense on â€œI Have Seen the Wayâ€ with Alex Lifeson and Kirk Hammet.

– Krewella returns to the stage on the feat ‘Never Been Hurt’. BEAUZ

– Jayceeoh started â€œBubble Upâ€ on his latest version of Deadbeats

– The Milwaukee Summerfest is already heating up, with the announcement that Jason Aldean will headline the festival’s opening night on June 23, 2022, at the American Family Insurance Amphitheater. Gabby Barrett, who will open for Aldean, will also join the lineup on June 23.

– Garth Brooks returns to Las Vegas next year with the launch of Garth Brooks: The ONE Man Show, an intimate two-concert ensemble taking place February 4 and 5 at Dolby Live at Park MGM.

â€œI can’t wait to celebrate my birthday early this weekend in Vegas. Learning to sing and hearing everyone sing is my favorite thing,â€ Brooks said via a press release. The singer turns 60 on February 7. 2022.

– New feat from Blake Shelton. HARDY, “Light up the night”