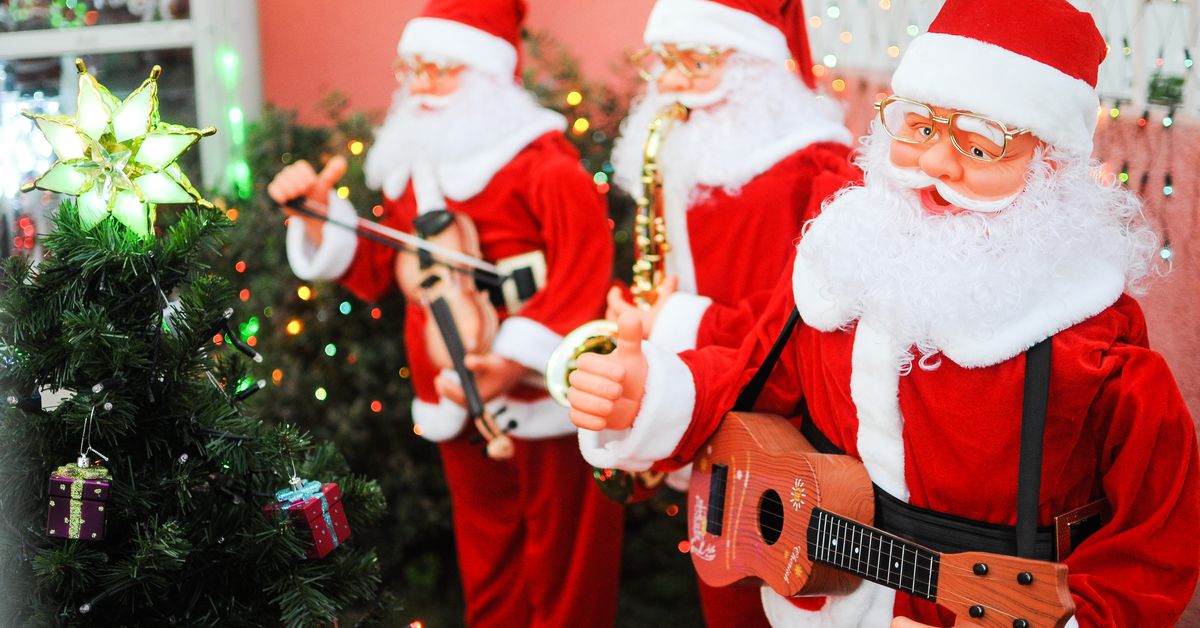 Living in November and December in the United States means slowly but surely getting tired of the small handful of Christmas and holiday songs playing endlessly in all public spaces. If it’s starting to look a lot like Christmas, all you can do is just grit your teeth and accept that by the 500th part, even “All I Want For Christmas Is You” will start to bother you. gnaw at the soul.

But there is another way. At least in your home, car, and other spaces where you control the music you listen to (which is everywhere if you have headphones): the greatest Christmas music playlist ever. It’s called FaLaLaLaLa GREAT BIG Christmas Variety Shuffle List, and you can find it on Spotify.

It’s hosted by “The King of Jingaling” aka Washington State-based teacher Brad Ross-MacLeod aka the owner of FaLaLaLaLa.com, by far the best online hub for discussion and music collection from Dark Christmas. It also serves as a hub, via its forum, which links a bunch of other essential Christmas music websites, like Ernie, Not Bert, and Hip Christmas.

Ross-MacLeod first traces his love of holiday music to the Christmas music albums of the Hollyridge Strings and the Mike Sammes Singers that his parents played when he was a child. But his interest in the genre as a fan dates back to the late 1990s, when the release of two CDs named Christmas cocktails revived his interest in old holiday tunes.

“Those two records really opened my ears to the world of hidden Christmas music on mainstream radio at that time,” Ross-MacLeod told me. “I started going to the thrift stores where I lived in central Pennsylvania to buy old vinyl records. … When you have a weird passion like that, you really want to connect with other people who share it. I couldn’t find anyone anywhere in Pennsylvania, so I made a website to bring them to me. The forums are still the most active part of the site and we’ve been going there since 2004.”

Ross-MacLeod is one of the go-to names in the small but mighty community of people who collect all the Christmas music they can find online. they all tend to be extremely nice people who will love discovering an album of Burl Ives singing Christmas carols with spoken-word intros about how they were supposed to be adored by various presidents.

When I first dived into this community in the mid-2000s, everyone involved was legitimately preserving albums and songs that had essentially disappeared. The digitization of this music existed in a legal gray area: it technically infringed copyright, but since the albums were no longer commercially available (and many of them had unclear situations as to who originally owned the copyright), cease and desist letters have been much rarer than they were for your average Limewire or Kazaa user. (Long live 2006!)

But the rise of these sites proved to many labels, both majors and boutiques, that there was value in the many Christmas albums that were just gathering dust in their vaults. With the rise of Spotify and other music streaming services, it was fairly easy to place digital versions of these songs where any subscriber could listen to them.

But it made an already mountainous amount of holiday music even more mountainous. How could anyone ever find what was good in this huge pile? Many listeners have only viewed playlists containing the same handful of songs that your average department store mashes up, further increasing the ubiquity of those songs.

Enter Ross-MacLeod and his playlist. With just under 4,000 songs and just under eight days of music, you can start shuffling the songs on the list right now, listen to them 24/7, and still have plenty of music when you go to bed on Christmas Day.

And these aren’t songs you’ve heard a million times before. There is a rich diversity of genres and performers, but the playlist focuses on things that go unnoticed. There’s a disco-infused “Little Drummer Boy”, a variety of tracks from the Seeburg Library (an easy-listening competitor to the more famous Muzak), and even songs from artists you’ve heard of, like the Jackson 5 and Perry Como and Harry Connick Jr.

“I want to hear a wider variety of Christmas songs than you would hear on most radio stations. I want a mix of the familiar and the surprising,” Ross-MacLeod said. “A big part of Christmas is a matter of nostalgia, so there must be some of the musical comfort food of the past. Even in my narrow field of interest, there’s a lot of music that most people don’t hear. I’m a musician and I think that I have an ear for what is good or at least interesting.

Ross-MacLeod doesn’t entirely avoid the songs you’ve heard before (Mariah’s “All I Want for Christmas Is You” is there, because how could you not), but there is a definite bias towards the music that will be new to you, even from artists you know well. Yes, the list contains the Jackson 5 “Santa Claus Is Coming to Town” (a classic), which you may have heard before, but their versions of “Up on the Housetop” or “The Christmas Song”, which are all two excellent , are not as widely played.

“Considering how many songs are Christmas standards, a lot of songs get repeated,” he said. “But I’m looking for versions that have something different – interesting instrumentation or new bridge or even a medley. Familiar and comfortable but also surprising and fresh.”

So, are there any under-the-radar Christmas songs that Ross-MacLeod hopes will become as big as “All I Want for Christmas Is You”? He points to the soundtrack of the 1970 film Scrooge (a musical adaptation of A Christmas Carol) and several tracks from rock musician JD McPherson’s 2018 Christmas album Socks. But he also says there’s so much good Christmas music that it’s really, really hard to become a standard.

“These songs are only played a few weeks a year, and they have to compete with decades, if not centuries, of songs that have already become standards. Since it took the tune of Mariah and ‘Last Christmas’ [by Wham!] a while to really become standards, I think it’s going to be a while before we see another one,” Ross-MacLeod said. “Most likely it won’t be something that recent. It takes a lot of covers to make a song a true Christmas standard.

So if you’re ready for something – anything – different to treat your ears to as Christmas approaches, hit up Ross-MacLeod’s Giant Playlist (or some of his other smaller playlists) and find new seasonal favorites. I can’t go through December without it.

FaLaLaLaLa GREAT BIG Christmas Variety Shuffle List is streaming on Spotify. For more recommendations from the world of culture, check out the A good thing archives.