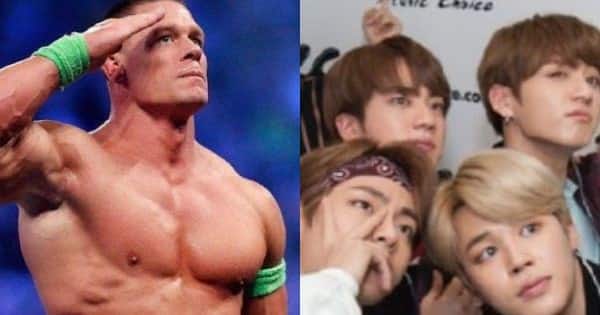 John Cena recently revealed that BTS was his music of choice while filming his DCEU debut, The Suicide Squad. The actor always said he was a huge K-pop fan. John Cena has always said that BTS is one of his favorite musical artists and also revealed how BTS ARMY has influenced his life and contributed to his vulnerability. The BTS group consists of seven members including Suga, Jin, J-Hope, RM, Jimin, Jungkook and V who have managed to win millions of hearts with their music. Also Read – BTS ARMY Prince of V aka Kim Taehyung’s Avatar Will Leave You Passed Out – Check Out Irresistible Pictures

Professional wrestler-turned-actor John Cena recently revealed that South Korean pop group BTS’s playlist is his go-to music while shooting for his movie. In an interview with the Television Critics Association for TCA21, the hunk said he “was just in a phase when listening to BTS.” Also Read – BTS: Chris Martin Calls THE Perfect Bangtan Boy Voice in My Universe; Courtney Cox agrees with him

â€œI was just in a phase where I was listening to BTS,â€ Cena said when asked about this BTS playlist for SUICIDE SQUAD. # TCA21 pic.twitter.com/O0p6RRvnbc

Meanwhile, James Gunn said Peacemaker’s soundtrack got him excited after Guardians of the Galaxy Vol. 1, during the TCA21 panel. The Suicide Squad was released this year and John Cena tried out the role of a rogue vigilante Peacemaker who was recruited by Amanda Waller to join Task Force X aka Suicide Squad. Fans loved the character and now the directors of the film are planning a spinoff series called Peacemaker. The series will feature actor F9 and will be created by James Gunn. Also Read – BTS Poll: V, Jungkook, RM, Jin, Jimin, Suga, J-Hope – Which Bangtan Boys Is Perfect Dating Material? Vote now

2021-09-24
Previous Post: Texas A&M Vs Arkansas Music Playlist: Here We Are Now, Entertain Us
Next Post: Will Alan Jackson direct the best country music videos of the week?