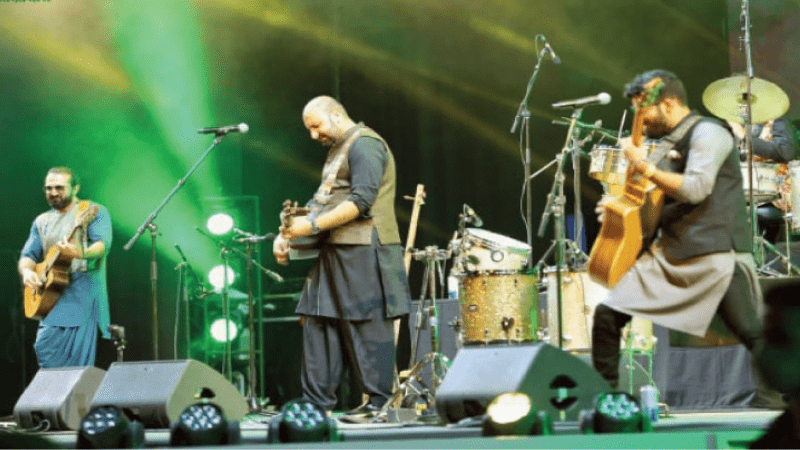 Khumariyaan, a popular music group, is set to embark on a three-week tour of East Africa to perform live in four cities with the aim of showcasing different shades of Khyber Pakhtunkhwa music.

The quartet of young artists Farhan Borga, Sparlai, Rawail, Amer Shafiq and Shiraz would leave for East Africa the second week of October for live performances in the cities of Nairobi, Mombasa, Diani and Arusha which would be followed by a workshop. The event is reportedly sponsored by a private organization, Creative Bhaag, based in Kenya.

Bogra, a rabab player and leader of the group, told this scribe that Khumariyaan would introduce different shades of Khyber Pakhtunkhwa folk music for the first time to East Africa. He said they would also highlight the province’s people, culture and folk music traditions during the workshop.

“The rabab, sitar, guitar and zerbaghali would be presented to African audiences with a basic tempo in Pashto music, while a workshop would be part of the event in which participants would be enlightened about the history, the culture and people of Pakistan and KP as a whole,” he said.

Bogra said Khumariyaan will perform with African artists to encourage mutual musical specialties to uphold world peace, universalism and cultural diversity. “Performances will be held at leading hotels, academies and universities, in addition to resorts in four cities,” he added.

Previously, Khumariyaan represented Pakistan in the United States, United Kingdom, Europe and the Gulf States. The group enjoys a wide fan base overseas due to their innovative style and unique way of expression.

Bogra said his music group focused on exploring universal symphonies through instrumental performances because it needed no language but had a thrilling impact on the audience. At the recent Dubai Expo, Khumariyaan was widely appreciated by a diverse audience due to his ensemble performance, he said.

He said the invitation was extended to his music group by cultural activist Seema Salim, the founding director of Creative Bhaag, who assured them that their visit would be followed by a series of engaging exchange initiatives. other music groups to strengthen cultural ties.

“Our vision is to collaborate with artists and musicians, who share a collective vision of preserving our respective heritage and culture and also to elevate our folk music from supporting vocal culture to instrumental fusion,” said Bogra said.